Ursula Scheid was born in 1932 in Freiburg im Breisgau, Germany, and studied at the Werkkunstschule in Darmstad.  Following her marriage to Karl Scheid, the two artists shared a studio in Dudelsheim and worked for Rosenthal, a German industrial porcelain company.

Scheid worked in stoneware and porcelain, was influenced by Bernard Leach and Lucie Rie and adhered to German traditions in aesthetic and design.  She was a member of 'The London Group,' which comprised six German potters who first exhibited at Henry Rothschild's gallery, Primavera in the late 1960s. 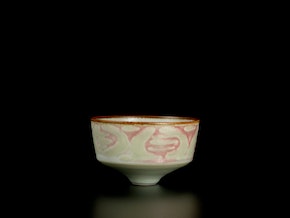